Jump to Navigation
Home › Royal gift fit for a Prince ›

Royal gift fit for a Prince

He’s only a few hours old, yet he’s the most talked about baby in the world.

While he’s been showered with gifts from countries all over the world, the new Prince is also being sent an exclusive Royal babygro to celebrate the Olympic legacy that is being celebrated in England this week.

While the Duke and Duchess of Cambridge have been sent reams of gifts for their new-born son, Community Games wanted to present the young Prince with something to remind him of the role Prince William and the Duchess played in helping to bring and celebrate the Olympics in the UK, as well as helping to create a lasting legacy of the Games.

As ambassadors for Team GB during the Olympic and Paralympic Games, the Royal couple supported the Games and actively encouraged people all over the country to share their love of sport and celebrate the Games locally.

Through Community Games people all over the country were able to enjoy their own Olympic and Paralympic moment. And for many babies and toddlers alike it was their first experience of people coming together to take part in sport and physical activity in their own community.

It is hoped the Duke and Duchess will take the Royal baby to one of the 1,407 Community Games that are taking place this year.

Steve Nelson, Chairman of Community Games, which is delivered by the County Sports Partnership Network and the YMCA, said:

“We hope the new Prince will one day follow in his parents footsteps and act as an ambassador for sport and cultural.

There has been a lot of speculation about how Prince William and the Duchess of Cambridge will raise their son; I believe his upbringing will be one close to their own, and he will be presented with the opportunity to take part in a variety of activities, children his age do.

We would welcome Prince William, the Duchess of Cambridge and the Prince to any one of the 1,500 Community Games events we host in England so that they can enjoy a family day out – in the spirit of the Olympic and Paralympic Games - like one million others do every year.”

Just as the new Prince is a Shining Light in his doting parent’s eyes, Community Games have also awarded him with their unique ‘Shining Light’ status. He will join a group of 70 other ‘Shining Lights’ who have been awarded the special status for the roles they have each played in helping to keep the legacy of the Olympics alive.

These Shining Lights have been taking part in the Community Games Relay – which has been mirroring the steps of the Olympic Torch Relay – and each day have been celebrated for the role they have played in creating an Olympic legacy in their community.

They will receive a special thank you for the roles they have played at the end of the Relay, the one-year anniversary of the Games, by Lord Coe at the Copper Box Arena, at the Queen Elizabeth Olympic Park.

“The new Prince is a ‘Shining Light’ of the future and it is hoped he will lead a generation of boys and girls in keeping the spirit of the Games alive for years to come.” 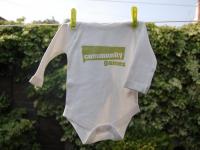