Celebrating the Olympic Torch Relay one year on, one legacy programme will be honouring people who have helped bring Olympic spirit to life in their local communities.

Community Games – an Olympic and Paralympic Games legacy programme funded by the Social Action Fund and delivered by the County Sports Partnership Network (CSPN) and the YMCA – has organised a 70 day long celebration to mark the one year anniversary of the torch’s arrival.

The community led sporting and cultural initiative will be shining a spotlight on each location, in England, that last year’s Olympic Torch Relay passed through. It will be showcasing the legacy created within local communities and demonstrating the power of volunteering.

Just like the Olympic and Paralympic Games paid tribute to torchbearers across the country; the Community Games Relay will also pay homage to a representation of the 36,000 volunteers who have helped light up their communities and create a lasting legacy of London 2012, through Community Games.

Seventy  people will be selected as Community Games’ ‘shining lights’ to receive a commemorative jersey and take part in a celebration at the Olympic Park on day 70 (July 27).

Starting this Sunday, on May 19 in Land’s End, and finishing up at the Olympic Park on day 70, July 27, events range from bicycle ballets right through to pram races in parks.

"The 2012 Games showed people what is possible when they come together and get involved. A strong country is built on solid communities, which is why we have awarded Community games support through the Social Action Fund, helping more people improve where they live and discover what a rewarding experience volunteering is."

“The Olympic and Paralympic Games of 2012 inspired so many people to come together to enjoy sporting and cultural activities and in its wake has left behind a legacy in communities all over the country.

We are thrilled that so many people want to continue the legacy of the Games in their own communities, through Community Games.

We polled leaders of local games last year and 60 per cent said they would like to hold a Community Games again this year and I am delighted to announce we already have 500 games registered.”

“It is thanks to Community Games that the spirit of London 2012 will live on for years to come in people, and especially young people, across England.

The YMCA has always worked to bring young people together with their families and friends in their own community. Community Games provides the perfect platform for them to do this.”

Last year more than one million participants took part in the 1,600 Community Games held with the support of 36,000 volunteers. 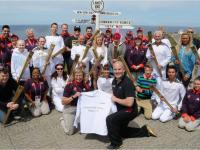