One sporting hero is already a Commonwealth Games winner as she gets set to attend the games in Glasgow on behalf of a London 2012 legacy project - Community Games.  She has been commended by Lord Coe and celebrated as a great role model for others to follow.

Shaida Akbar was awarded the title of ‘Shining Light’ by Get Berkshire Active. She belongs to a celebrated group of shining lights from across England who each have been recognised either by their local County Sports Partnership or their local YMCA, for inspiring their local community to come together in sporting and cultural celebration, keeping the flame of Olympic and Paralympic legacy alive.

Shaida who is Chair of a group which works to make sport and physical activity accessible to all areas of her community, was selected from a shortlist of six by an esteemed panel of judges including former Olympic athlete David Moorcroft and Charles Runcie, Head of BBC Sport, Regions.

Get Berkshire Active selected Shaida because the Upton Lea Unity Group she chairs has been responsible for encouraging hundreds of people in her local area to become more active and consider healthier lifestyles. Amongst their many achievements the group has established a multi-sports club for local girls and secured long term partnership funding from her local council.

“Everyone at Upton Lea Unity Group is thrilled about this award,” commented Shaida. “It has truly been a team effort and I am going to the Commonwealth Games on behalf of everyone who has worked hard on this initiative.

“I can’t believe we have come so far. Community Games has really inspired us and it gives me real pleasure to inspire others and to give them the confidence to go on and achieve so much.”

The Prime Minister’s Olympic and Paralympic legacy ambassador, Seb Coe CH KBE believes the work of people such as Shaida is key to sustaining a long term Games legacy.

“Two years on, the London 2012 Games continues to inspire unsung heroes to encourage sporting activities within their communities. Shaida Akbar is a great example of keeping the Olympic and Paralympic legacy alive by persuading people to make sport a fun part of their lives.

“I have been involved with Community Games since its inception in 2010. It is a fantastic programme and benefits the health and well-being of local communities. The commitment and passion from our Shining Lights reflect how the spirit of the Olympic Games continues.”

In representing the Community Games Shining Lights in Glasgow, Shaida hopes to inspire others to get involved in bringing their own friends, neighbours and community together by organising their own Community Games. The only criteria is that there is some element of ‘celebration’ and throughout the country this has taken many forms from community picnics to major festivals.

This year the initiative, with the help from over 11,000 local volunteers, has attracted more than 400,000 participants to get involved. As a result of trying new activities in an informal environment at a Community Games, many have said that they are now more motivated to continue with a more active lifestyle following the event.

For further information on how to organise Community Games please visit: www.communitygames.org.uk 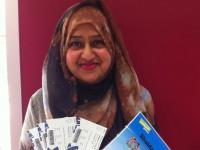