The children all enjoyed it, with some even having a second go at the challenge, one 9-year-old boy completing the course four times!
Plenty of volunteers, who all seemed to enjoy their day out in the park as much as the participants, warmly supported the younger children, still mastering the bike ride, and helped them finish the event. Everyone got an inspirational medal for completing the course.

Participants and the audience also enjoyed face and arm painting with a range of countries’ flags to choose from. Children were undoubtedly having fun in the company of the flag painter and some of them experimented with a combination of various flags. Temporary tattoos of the Foundation logo were also on offer.

Following the duathlon and the flag painting, children were encouraged to create a ‘mural of feelings’ expressed through pictures and words, which captured their emotions on the day.

The Organisers felt that this was a great way for them to see the Games through the children’s eyes and make the event more memorable, and hope that its success will inspire others and more such events will follow through not only in Watford, but throughout Hertfordshire as well! 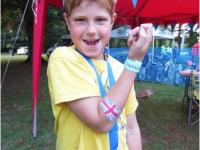