With the second anniversary of London 2012 approaching, Community Games is showing that Olympic legacy lives on this summer by celebrating the volunteers and community ambassadors it inspired.

Community Games is back in 2014 with sports and cultural activities happening across the country over the coming months. An important part of this year’s celebration is honouring the volunteers working hard to keep the London 2012 Olympic spirit alive in local communities.

Back in 2012, the Olympic and Paralympic Games paid tribute to torchbearers across the country. One year later, Community Games mirrored this spirit by recreating the 70-day torch relay and each day crowned standout Community Games volunteers as Shining Lights at every location on the trail. This culminated in Lord Coe being named as the 70th Shining Light at the Copper Box Arena on the one year anniversary of London 2012. In 2014, the 2013 Shining Lights are handing over the baton to successors in special celebratory events scheduled around the country this summer.

“Games Makers had an important role in the success of London 2012. In fact volunteers have been integral to the success of the Olympic Games since they were first used in 1948. The Community Games Shining Lights bring this Olympic and Paralympic ethos into our everyday lives by organising great activities for our families, friends and neighbours to enjoy, whilst simultaneously encouraging them to be more active. These volunteers truly deserve this recognition.”

Community Games is an Olympic and Paralympic Games legacy programme funded by the Social Action Fund and delivered by the County Sports Partnership Network (CSPN) and the YMCA.

“Volunteering is vital to everything we do at YMCA. We rely on the enthusiasm and generosity of people in our communities to drive our initiatives and achieve great things for young people, so we value and have huge respect for volunteers. That’s why we support Community Games with so much energy and why I’m personally so delighted to see those donating their time and skills to community activities getting the recognition they deserve again this year through the Shining Light initiative.”

It’s recognition and support that is appreciated in the volunteering community. One of the new 2014 Shining Lights, Cliff Dargonne, said

“The Community Games event has been a great way to unite the local sports and social groups into one great summer spectacular event, raising awareness of the other groups that are active in our area, when sometimes volunteers can feel they are the only people involved. My co-ordinating role in this has allowed me to get to know some of the other leaders with whom I may never have come into contact, and improve connections across the community.”

“Community Games has grown incredibly over two short years in Sussex. The reaction from our organisers has been overwhelmingly positive. They feel the simplicity of the programme is key to its success and the free resources and promotion is an added bonus to their event. Events are growing in size each year and we’re finding that as more local people find out about the event, it becomes more popular and a staple within the local community, attracting more and more people year on year.”

“In the past two years, more than 150 Community Games events have been staged in Essex, all of which have helped to stimulate interest and involvement in grass roots sports. Highlights have included The Wild Woods day in Rochford which had more than 3,000 participants, a football tournament in Rowhedge, Manningtree Mud Festival, Woodup Pool Fun Day in Tollesbury, Rowhedge Regatta, an orienteering trail, a festival and sports day for the disabled, a YMCA Rollerskate event, town shows, family fundays, street festivals, village and school fetes, urban games, holiday clubs and camping weekends to name just a few.”

And none of this would be possible without the enthusiasm and energy of the volunteers who make these sports and cultural events happen.

“Ask a crowd of people who their sporting heroes are and you’re guaranteed to hear the names Mo Farah and Jessica Ennis. London 2012 had a huge impact on our perception of sport, from the athletes we admire to encouraging us to participate ourselves - the legacy is still going strong two years on thanks to the volunteers keeping the Olympic spark alive through Community Games. The aim of the Shining Lights initiative is to celebrate these unsung heroes and recognise the contribution they make to community life.”

This year is the 30th anniversary of Volunteers’ Week (1st to 7th June 2014) and Community Games is joining in the celebrations this summer by honouring the Shining Lights keeping the spark of London 2012 alive in communities across the UK. 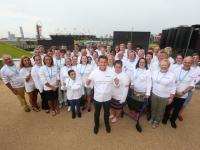