A campaign is being launched this week to combat low self-esteem amongst young people.

YMCA England is deeply concerned at the growing number of young people suffering from a lack of confidence in their abilities because of today’s celebrity and image-obsessed culture.They believe that as a result of this young people are being denied opportunities to take part in cultural and sporting activities.

Graham Oatridge, Physical Activity and Contracts Manager for the YMCA, said: “We live in a culture dominated by celebrities, reality TV shows and social media. I believe these factors have impaired the confidence of a generation of British youngsters and this is something the YMCA is deeply concerned about and is addressing through the ‘Great Laugh’ campaign. We are encouraging young people to interact with their peers and take part in a series of confidence building workshops. We hope these workshops will help give them the confidence to engage in community projects or sporting activities.”

On Thursday 31st January, the YMCA is holding the flagship Great Laugh event aimed at boosting the confidence of thousands of young people across the country. The event is part of a campaign that comes under the umbrella of the national Community Games – an Olympic legacy programme aimed at bringing families, friends and communities together through sporting and cultural activities.The launch of Great Laugh is taking place at London’s Irish Centre in Camden, at 4pm.

Top comedian and winner of BBC2’s New Comedy of the Year award, Lucy Beaumont, is backing the campaign. She is headlining the comedy-focused evening, which will also see participants take part in confidence building workshops. The popular comedian said she is thrilled to take part in the Great Laugh campaign. She said: “Sadly a lot of young people have a severe lack of self-esteem and confidence. I am really looking forward to meeting with the youngsters to help tackle this issue.” The 28-year-old former teaching assistant will be performing a sketch on the evening along with a series of other performers.

Mr Oatridge added: “We are really looking forward to the event and are delighted to have Lucy and all our other acts including Kidz4mation – the London-based confidence building school - on board supporting it.” 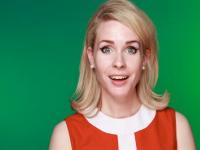