With the second anniversary of London 2012 fast approaching, Community Games is showing how the Olympic legacy lives on this summer by celebrating the volunteers and community ambassadors it inspired.

In 2013, Community Games mirrored the spirit of London 2012 by recreating the 70-day torch relay. At every location on the trail standout Community Games volunteers were crowned as Shining Lights. In 2014, the 2013 Shining Lights are handing over the baton to successors in special celebratory events scheduled around the country this summer.

We’ve asked some of the 2014 Shining Lights to share their experiences of Community Games through a series of blogs. First up, we catch up with Sussex’s newest Shining Light, Cliff Dargonne.

Hi Cliff. Congratulations on becoming Sussex’s Shining Light. It must be a great feeling.

Cliff: I’m flattered to be considered for this award. Our intention was to involve as many local groups as possible in a unique community event. The support received from local clubs is an indication we’re going about this in the right way.

The pleasure sport has brought me over the years is immeasurable. I hope this comes through in my enthusiasm to see others take part in sport and work towards and achieve personal goals.

You clearly have a lot of motivation – tell us more about where your enthusiasm for sport and exercise comes from?

Cliff: As a youngster I was involved in scouting, which introduced me to lots of outdoors activities. I acted as a scout leader in Brighton for several years, growing my interest in climbing, hiking and kayaking.

Cliff: Yes, as a young man, I joined Operation Raleigh, taking part in an expedition to Costa Rica. Then later, I joined a volunteer program, Frontiers Foundation, in Canada, and spent a summer working on an Indian Reserve in Northern Ontario.

My interest in climbing and travel has taken me to all corners of the globe, and led me to summit Mount Everest in 2003 - my greatest outdoors achievement yet. I went on to climb Mount Vinson in Antarctica, Carstansz Pyramid in Indonesia and became one of the few Britons to successfully complete the Seven Summits by climbing the highest peak on each of the seven continents.

Wow, what fantastic achievements and it’s great that you’re now putting this passion for activity into your community. We’re guessing this comes with some challenges though.

Cliff: We have a fairly active community, with lots of sports and social groups operating, but with little interaction between them. As a committee, our challenge was to bring these groups together and convince them of the benefits of joining in with a major community event from which everyone could benefit.

And that’s where Community Games comes in, right? What prompted you to get involved?

Cliff: A group of local volunteers were looking at the format of the existing village fete, which had become rather tired and poorly attended. They were keen to do something to mark London 2012, so together we decided it would be great to expand the normal fete and make it a community sports fun day, with the intention of widening the appeal across the community.

Just as we were putting ideas together and making contact with local sports and social groups, we became aware of Active Sussex and Community Games.

And the result was…?

Cliff: We started in 2012 with the Jubi-lympics, followed in 2013 with 'Summit Special' marking the 60th anniversary of the ascent of Everest, and this year it’s 'Road to Rio'.

These events have clearly been a hit locally. What are your top tips on how to run a successful Community Games?

To be successful, I believe a Community Games needs three things:

1. A core of reliable and enthusiastic volunteers, including a secretary to keep track of who has accepted what jobs.

2. Appeal across the community. It needs to be inclusive and offer attractions for everyone regardless of age or gender, so that members of any sports or social groups (or of none!) feel that it’s a day for them.

3. Remember to say thank you. If people who have given sponsorship, donations or time are thanked they will be far more likely to help again.

Feeling inspired? If you’re encouraged by Cliff’s story, why not organise a Community Games in your area? Simply register your Community Games and get access to great resources, tips and support. And if you sign up by 30th June you’ll have the chance to win £500 for your community. 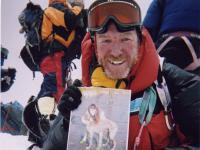