As Community Games has grown across the year, many CSPs have started to look for ways to recognise those individual events that have succeeded in embodying the values of the programme and that have made an impact in their local community.

This includes Jo Taylor, the Community Games Lead Officer working within the Black Country where enthusiasm for Community Games across the years has been phenomenal. Given the achievements of this region which has seen more than 120 games supported by over 1,000 volunteers, Jo felt it important that this hard work was recognised in their annual Black Country Sport & Physical Activity Awards. A new ‘Best Community Games Category’ was subsequently created, and the inaugural winners announced in November were ‘Tipton BMX Community Games’.

After a lengthy judging process examining many high quality entries, Tipton BMX community Games was selected for its outstanding and creative response to the Community Games initiative. Working with local young people, the Tipon BMX Community Games was carefully managed at every stage providing a fun and innovative event based at Tipon’s new skate park.

Supported by Sandwell MBC, Parks and Youth Services, Friends of Victoria Park, South Tipton Extended Partnership, StreetGames and West Midlands Police, Tipton BMX community Games grew in 2012 , expanding to four venues; hugely increasing the impact on young members of the community who welcomed the opportunity to engage in sport during the summer holidays.

The important work of Tipton BMX community Games was underlined by a representative from West Midlands Police who commented: “The event has proved to be an extremely valuable initiative which has engaged local youths in the community in diversionary activities away from crime, provided them with safe awareness in the use of cycles and made good use of a public space, which in turn, assists in providing community reassurance to all members of the public using the area.”

Congratulations to Tipton BMX community Games for all their hard work and we look forward to hearing more success stories in 2013. 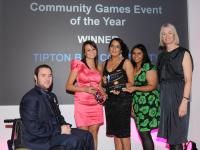