If you were in Harborough, Leicestershire, on Saturday 21st July, you may have heard the cheers of the 1,100 participants and spectators at the Opening Ceremony of Harborough’s Community Games, eagerly waiting for the competition to start.

Each one of the schools got to choose which nation they would represent, unfortunately, not everyone could represent the UK. For each event, the representatives walked out proudly to compete for Harborough’s highest honour – a gold medal. The competition was fierce and with everyone striving to succeed. For those that finished in the top three for their event there was a full medal ceremony, which even had the national anthem of the winning nation played.

There was also a rugby club taster session which was occurred alongside the Games, which was so successful that many of those participating involved chose to join the rugby club afterwards.

The parents really enjoyed watching their children having fun running around and participating in sport, and also socialising.

Overall, the day was a great success: many people tried new sports; everyone enjoyed themselves and it really brought the community together.

Finally, it is worth thanking those that organised, volunteered and helped fund the event, it was a memorable day. 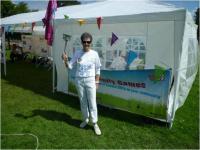