The Badminton Community Games, which took place on Sunday 10th June at Hermitage leisure centre near Leicester aimed to embrace the spirit of the Olympic Games.

In the opening ceremony, the 100 participants all representing various nations - some even had their nation’s flag painted on their faces - they marched out with flags waving, music blasting in the background, amidst cheers erupting from an excited crowd and the Games had begun!

The day was a symphony of sport with many people trying their hand at Badminton for the first time. There was also competition was fierce with all participants desperate for their nation to succeed but ultimately there could only be a few medals awarded.

At the end of the day, in true Olympic style the medal winners stood on a podium and basked in the glory that came with winning at the Badminton Community Games.

Everyone involved felt that it truly was a memorable day, which really brought the community together and enabled all the participants to enjoy their ‘Olympic moment’.

A massive thank you must go to the 20 volunteers that helped on the day, everyone who was involved in organising it and those who donated towards it because without them it would not have been possible. 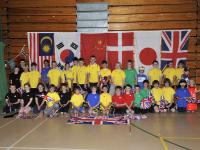