Mum-of-two and Lloyds TSB branch manager Sharon Worthy was nominated to be a London 2012 torch bearer for the volunteer work she has done in her local community. Sharon carried the flame on 21st May 2012 in Combe Martin in Devon. She was so overwhelmed by the experience she decided that she wanted to do something for her community to celebrate the London 2012 Olympic and Paralympic Games.

Sharon heard about the Community Games programme and decided this would be a perfect programme to help her and the local community to celebrate London 2012. With help from Wesport, Sharon applied to run a Community Games and received funding from the West of England Community Games fund, which is managed by the Quartet Foundation.

As well as being an amazing community event, the Portbury Community Games also helped to raise money for both Macmillan Cancer Support and Help for Heroes. More than 200 people attended over the two days and in total the Games raised over £1,500.

Sharon described the Portbury Community Games as, "More than I could have ever have hoped for. When I was running with the Torch in Combe Martin I was so overwhelmed by the support the local community gave me. I wanted to bring that feeling back to my community in Portbury and the Community Games programme was a perfect way of doing that. The event was a great two days and for me to see so many happy faces of all ages enjoying so many different sports, whilst raising money for charity was exactly why I wanted to run a Community Games."

Jackie Hilleard, Wesport Community Games Lead said, "You don’t have to have held a flame for a Community Games event to be a roaring success. Sharon is a great example of someone who wanted to give something back to their community and I would urge anyone who feels that they want to bring their community together to celebrate, to get in touch with us and we will help make your event a success however big or small."

Not surprisingly given its success in 2012, plans are well underway for the second Portbury Community Games in September. 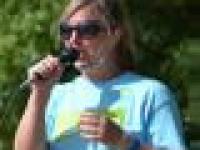