A new Community Games event drew hundreds of people to a Bushey park on 21st July.
Crowds gathered at King George Recreation Ground to take part in traditional races at the Family Fun Day, which looked to bring the community together and get people involved in their local park.
The Games, which ran all the afternoon, featured a variety of classic games, including tug-of-war and an egg and spoon race.
Event organiser, Rob Dodkin, said he felt it was important to put on an event in the area, as he felt that "Bushey gets missed out quite a bit", compared to some of the other parks in Hertsmere.
Other races included the use of space hoppers, eggs and spoons, wellies and sacks, and medals were well-received by the children who took part.
There were plenty of activities to keep people entertained who did not want to compete, with two bouncy castles, a merry-go-round, bumper cars and Ju Jitsu displays on offer.
Live bands played throughout the afternoon, with live music from Minnie Birch and Tom Craven.
As it was the first event, Rob had not expected the day to attract quite so many people, although he hopes the afternoon’s success will mean that next year’s event will be even bigger and better.
"The plan for next year is to carry it on, hopefully extend it onto the second field in the park a big stage for bands to play on and to maybe tag it onto the end of the Bushey Festival”, said Rob.
He added: "We really wanted to get people back into their local park and I think our Community Games achieved that." 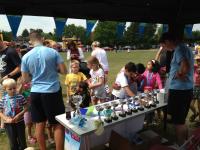