Community Games is benefiting from nearly £1 million, thanks to the Cabinet Office’s Social Action Fund.

In 2012, there were more than 1,600 Community Games events, across the country, organised by a staggering 36,847 volunteers and attracting more than one million participants.

The Minister for Civil Society Nick Hurd said: “Community Games bring people together who have been inspired by London 2012 so that they can take part in sports and arts activities locally. We are giving them extra funding from our Social Action Fund so that this year even more local sporting opportunities can be provided, giving a boost to community life.”

Lee Mason, Chief Executive of the County Sports Partnership Network (CSPN), said that he is delighted the CSPN and the YMCA are continuing to deliver the programme.  “I have been impressed by the way in which Community Games has engaged with communities across the country. I have seen first hand the impact this has had in local communities and it has been a great way for people to engage in sport and the arts in a fun and interactive way. We hope that many people across England will step forward and run Community Games in their local community this year.”

Independent research found that 50% of people that took part in Community Games in 2012 said the events had inspired them to take up sport, while 74% of participants reported taking part in a sporting activity at a Community Games event. 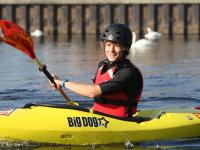