As Glasgow rightly receives the plaudits for putting on what is already been talked about as one of the best ever Commonwealth Games, thoughts now turn to the legacy it will leave.

Community Games, the Olympic and Paralympic legacy programme which was launched to encourage communities to come together and take part in sports and arts activities, shows just how successful such a programme can be.  Since 2012 more than 4,000 Community Games have taken place, inspiring over 2.8million people to engage in sporting activities.

One of the reasons Community Games continues to be so successful is the hard work and dedication of over 82,000 volunteers who have helped drive the legacy forward. And one of those volunteers who was invited to see the action in Glasgow as a result of the work she has undertaken for Community Games, was certainly inspired by what she saw in Scotland.

Shaida Akbar was nominated by Get Berkshire Active to be recognised by Community Games as a Shining Light for the outstanding work she has done inspiring her local community to get more active and take up sport.

Shaida from Upton Lea near Slough, was chosen by an esteemed panel of judges including former Olympic athlete David Moorcroft from a shortlist of other outstanding Shining Lights across the country, to attend the Commonwealth Games to see legacy in action.   And her time in Scotland has inspired Shaida as she gets set to continue her work south of the border.

“Going to Hampden Park was … well… wow. The atmosphere when we got there was amazing.

“There were so many people but there were plenty of stewards and volunteers to keep everyone on track. They were all smiling and happy and were high fiving everyone, which really added to the atmosphere.”

After her three days in Glasgow, Shaida has returned home to help organise another event which is helping to keep the legacy alive in her home community. The Upton Lea Community Games is a multisport event offering attendees the opportunity to try a whole variety of sports for free. With sports including archery, relay races and volleyball available, the event certainly has a Commonwealth feel to it.

“Multisport events are the way to go,” continues Shaida. “We try to get lots of different sports together which you wouldn't normally see in one arena as we want to give as many people as possible the opportunity to try new sports.”

Olympic and Paralympic legacy ambassador, Lord Coe believes the work of people such as Shaida is key to sustaining a long term legacy.

“Two years on the London 2012 Games continue to inspire unsung heroes to encourage sporting activities within their communities.  Shaida Akbar is a great example of keeping the legacy alive by persuading people to make sport a fun part of their lives.

Community Games is an on-going legacy programme operating throughout England. For anyone looking to organise an event in their local community, information on the support and resources available can be found at  http://communitygames.org.uk/organise-games. 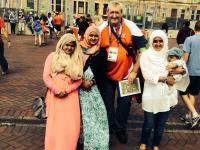