Last month, in Shropshire, Oswestry held its Community Games - a nine day sports extravaganza, which was enjoyed by 500 participants of all ages and abilities.

Events included a family fun day, which involved fencing, basketball and a whole variety of other sports. Everyone got involved and really gave it a go. The zorbing was a particular highlight as it is such an unusual sport and one which people otherwise may have not had a chance to participate in. There was even synchronised swimming, which many performed quite elegantly in.

The Games culminated in a 10km race which was started by Olympian and former 5000m World record holder David Moorcroft. His presence was a real inspiration to the 250 runners, many of which posted fantastic times and everyone agreed that it was a wonderful way to conclude the Games. As David said, “I am so pleased that the sports clubs in Oswestry have really taken the Community Games idea to heard and come up with something really special. This really has been a fantastic celebration of the Olympic Games coming to the UK.”

Organiser Jim Hancock said, “we have had a lot of help from everybody in Oswestry, it has been a real community event, We were thrilled to have David Moorcroft here, he’s one of the country’s best runners and a legend.” 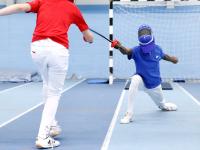