Foleshill is one of the most deprived areas within Coventry.  In terms of employment it ranks 19 out of 20; in terms of health it ranks 17 out of 20; and it has the highest levels of deprivation and the lowest levels of participation in sport and physical activity than any other area of the City.

Foleshill Baptist Church (www.foleshill.org), established over 100 years ago, has at its heart a belief of reaching up to God and reaching out to communities.  As part of a parish feasibility study ‘sport’ became a focus of interest in 2012 when it began to recognise that some form of Community Games would provide an opportunity for children and families to come together and take part in a variety of sporting activities provided by a range of local agencies.

The 2014 event took place on 30 July – 1 August, attracting more than 150 people each day and involving 24 different activities.   Support was provided by 31 partners with funding from Coventry City Council, the local Community First Fund and Greggs.

The event, which was free to attend, was primarily aimed at 5 – 11 year olds accompanied by their parents or guardian, who were encouraged to join in activities.

As Tim, Rees, the Event Organiser, explained:
“As a ‘step of faith’ we booked Edgwick Park in the centre of Foleshill for 8-10 August 2012 and again in 2013 and again in 2014!  Since doing so I have been surprised not only by the openness of local groups/agencies in terms of supporting this venture but also by their comments as to seeing this as a way to work with the Church in the provision of sporting activities in the community – encouraging children, young people and families to ‘take-up’ some form of exercise. We are also giving careful consideration to the Legacy of the Olympics that we want to provide in terms of lasting impact in the community”

Since the Games took place, the feasibility of setting up monthly mini ‘pop up’ events in the park is being explored to provide more opportunities to take part in activities in the park, encouraging local people to make more use of it.  Also being explored is the feasibility of using the Church Hall and its car park for the more popular activities which can take place in a small space, such as archery, keep fit, dancing, judo and table tennis. 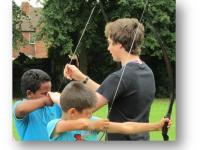